In honor of its centennial, The Orange City Public Library initiated the 100 Years of Stories Project, interviewing community members and writing their stories. 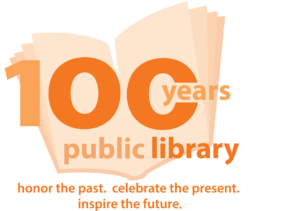 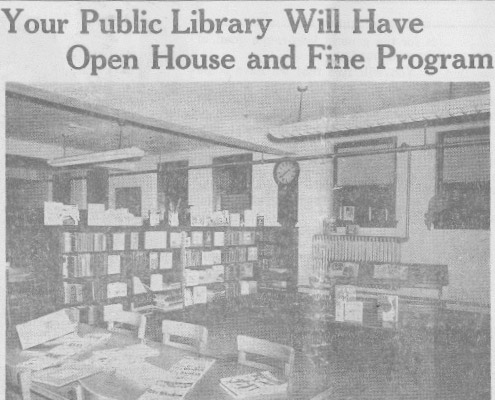 The library held an open house at its new location, the city hall basement, on November 8, 1951.

The Orange City Public Library was founded in 1915 as one of the first projects of the Orange City Women’s Club. In order to finance the project, the women’s club had a membership fee of 50 cents per family, held tag day sales, collected from house to house and operated a novelty stand at the Fourth of July Celebration. People of the community were asked to donate books. Reference books were borrowed free from the Iowa State Traveling Library. The first location was a small room in the municipal building.

In 1917, the Women’s Club appointed Mrs. B.H. Vande Waa as librarian. She served in that capacity until her death in 1955 – 38 years.
The basement of the Hawkeye Hotel (formerly the Village Drug Store) was the second location for the library. Its stay there was interrupted in 1932.

On October 13, 1932, the library suffered minor damage in a fire. The fire started in the wall between the hotel and De Jong Furniture to the north and spread to destroy the contents of the furniture store and most of the interior of the hotel. The damage did force the library to move to a temporary location in the Ford building, kitty-corner across the street. It was able to return the next spring to enlarged quarters in the hotel basement. At some time during their stay in the hotel, they shared their room with the city clerk and council.

In 1971, Mrs. Henry Te Paske, the chairman of the Orange City Library Board, announced the gift by Robert and Lawrence Rieckhoff to the city of the remaining Rieckhoff property south of the post office as a site for the library. The Rieckhoff brothers and their families gave the library real estate in memory of their parents, Mr. and Mrs. William Rieckhoff. Mrs. Rieckhoff served on the library board for nearly thirty years.

In April 1972, Dorothy Weiss was hired as administrative librarian and continued in that capacity to 1998. September of 1972 was the culmination of much planning, working, and dreaming. Approximately 20,000 volumes were moved into a beautiful new building on the Rieckhoff site. On November 18, the library was dedicated.

1987-1990 saw the automation of circulation process and card catalog system.
In 1998, Karla Chase, took the position as administrative librarian and oversaw the building of the current library in 2002-2003.

In 2007, the library installed a new self-checkout and RFID system.

In 2013, David Netz became the interim administrative librarian of the library.

In April of 2014 Sue Kroesche replaced the interim director as the new Administrative Librarian.

In January of 2017 Amanda Vazquez took over as the new Administrative Librarian. In the fall of 2017, the library underwent a significant project to renovate the children’s area.

Lisa Johnson, MLIS is the current Administrative Librarian. She started her administration in August 2019. Technology updates, facilities maintenance and grounds improvements have marked her first year of administration.

*Most of this information was taken directly from the “Our History” column by Tom Noteboom of the Orange City Sioux County Historical Society as it appeared in the Sioux County Capital Democrat.

We Appreciate Your Feedback …

Submit your requests for program ideas, content and database purchases or any other way we can help.